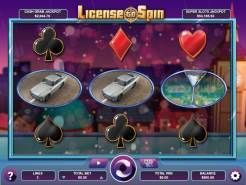 Play Now
Being a Bond fan is a definite advantage when playing this License to Spin slots game but even players who are not dedicated Bond fans will immediately take to this simple enjoyable and also rewarding slots game that includes two random progressive jackpots and bonus free spins and a special bonus game together with a wild and a scatter symbol.

Characters and Symbols in the Game

There are three reels and three paylines to the License to Spin Slots game where players will find four main characters in addition to all of the accessories that are related to Bond and his spy lifestyle. Bond is one of the characters alongside one of his gorgeous women and two evil bad guys that he is searching for. Other symbols include his automatic pistol, a sports car, a yacht and the all-important glass of martini. Players can place bets ranging from $0.30 up to $240 per spin on all three lines.

If the wild symbol appears on reel three the player is treated to a two spin re-spin feature. In the first re-spin the wild symbol moves to the left of its original place i.e. it is on the second reel and for the second re-spin the wild moves to the first reel. At the end of these two re-spins the player will see Bond shooting at a target. If he hits the target then he is treated to more re-spins with the wild moving back across the screen after each one of the three re-spins. If Bond misses his shot he is taken to a new screen to play the Shaken not Stirred bonus game.

The Shaken not Stirred Bonus game sees the Bond Lady holding two different martini glasses and the player is invited to choose for 007 the glass that he prefers. This glass then reveals a bonus amount that the player wins for that bonus round and the player is taken back to the main screen to continue playing the base game. There are also two random progressive jackpots that increase with every bet that is placed and the player can win one of these at any time during the real money game play. The cash grab jackpot starts at a lower value than the super slots jackpot. Playing License to Spin Slots is easy and fun and with only three reels and three paylines to follow it is a quick, exciting and rewarding game to enjoy.
Play Now 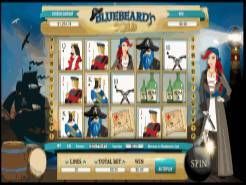 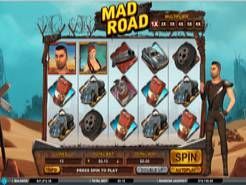